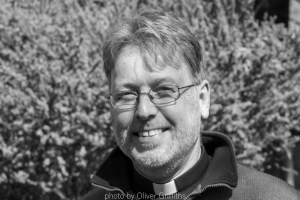 Simon joined the parish in February 2014.  Four years on it's exciting to see that work with children and families in both parishes is growing.  The links with both Church schools are strong and continue to grow.  The 'In Loving Memory' service is popular.  It's also wonderful to see how many people attend the Christmas services at both Churches.  Looking forward it's also great to see that the Feering project is possible and a work in progress.

Simon was born in Aldersbrook, near Wanstead, east London in 1962. Although baptised in the Church of England, as a child he went to the local Baptist Church which his parents continue to attend. He went to Reading University to study English Literature and Art History; it was here that he came to a living faith through the influence of friends, and was confirmed in the Church of England when he was 23. After graduating he worked for about eighteen months as a volunteer with the Church Army, a Church of England society. Following this he worked in the community mental health field for about four years, then trained as a teacher and taught English at Colchester Sixth Form College, again for four years.

It was in Colchester that he met his wife Liz at St Botolph's Church where they were married. They have two sons - Tommy  and Ben. After leaving Colchester Sixth Form College in 1997, Simon trained for the priesthood at Queen's College, Birmingham for three years, and then spent his first three years in ministry as Assistant Curate at All Saints' Church, Chelmsford, before becoming Team Vicar in the Witham Team Ministry in 2003.

Simon enjoys reading, art and architecture, theatre, cinema and most of the arts, watching and listening to cricket (but can't play at all), along with walking, cycling reasonable distances in unpunishing terrain, decent pubs and equally decent bottled beers.

Message to All Saints' Feering