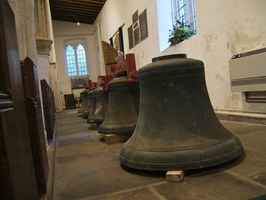 Until recently our 6 bells were hung in a wooden bell frame, which contracted and expanded according to the weather. The bells were situated very high in the tower, which resulted in very long bell ropes and combined with the fact that our bells are the heaviest ring of 6 in Essex, they were notoriously difficult to ring. “If you can ring at St. Mary’s, you can ring anywhere.” No major restoration work has been carried out to our bells since the early 1960s when metal headstocks and ball bearings were added and the bells have remained unchanged since then apart from routine servicing and maintenance. Some years back it was decided the time had come to ensure the safety and preservation of our historic bells for future generations and our bell ringing team, headed by our Tower Captain, John Elliott, embarked on a refurbishment scheme that will not only ensure this, but will include the addition of 2 new bells “at the front." This scheme would result in the bells being easier to handle, especially for our young ringers.

Following lengthy fundraising efforts, planning, consultations with various bodies, applications for grants, meetings, etc., and the granting of all necessary permissions, our bells have been re-hung in a new cast iron bell frame situated lower in the tower in what was the clock chamber. This will result in much shorter ropes, and a frame that remains constant in all weathers. Hanging the bells lower down will considerably reduce the stress on the tower while the bells are ringing. The clock mechanism will be moved up into the old bell chamber, behind the clock face and is being overhauled and modified so that it can be electrically wound. In early January 2006 our project began. The clock mechanism was been removed and the bells were taken down and were taken to Taylors, Bellfounders at Loughborough. A new platform to hold the clock was constructed at Taylors, a considerable piece of engineering. A coach party visited Taylors on 16th February 2006 and watched our new bells being cast. It was a very enjoyable and moving experience.