Skip Papworth, for so long celebrated as such an integral part of Kelvedon life through his involvement with the Scouts, the School, the Church, Kelvedon Players and so many other groups and organisations, died peacefully on Wednesday, 26th June 2019, after a long illness.

Sadly, in the same month as Skip’s funeral - at which a solitary bell was tolled - St Mary’s current 4th bell became cracked beyond repair. However, it can be recast using the existing metal and, as a fitting memorial to a great Kelvedon man, the bell ringers and the Parochial Church Council (PCC) have agreed to work towards that goal.

Introducing Skip's Bell- A fitting and proper tribute to a true Gentleman.

It has been many months since we began the fundraising campaign to raise the necessary capital to fund the re-casting of our old 4th bell which unfortunately cracked beyond repair.  I was delighted when the proposal put forward by the bell ringers to re-cast the bell in memory of our dear friend John 'Skip' Papworth MBE met with an enthusiastic favourable response from the local community and beyond.

The bell has now been cast by Britain's last surviving bell foundry John Taylor and Co. of Loughborough who are thankfully still busy casting bells not only for Churches in the

UK but all over the world. The inscription from the old cracked 4th cast by John Briant of Hertford in 1803 has been incorporated into the inscription band of the new bell. Skip's bell is tuned to the note B flat to fit in with Kelvedon's octave of eight bells the largest of which (The Tenor Bell) weighs 19 cwt and is tuned to the note E flat. The new bell is made of an alloy of copper & tin (bell metal) and weighs approximately 8 cwt being 407 kg.  The bell will soon be fitted with its headstock, and work to install it within the tower will begin on the 8th of March lasting for two weeks.

The Tenor bell in itself is an item of significant national importance as it was cast for the Festival of Britain in 1951 by the Whitechapel Foundry which sadly closed in 2017.

The bell sat on the South Embankment for the duration of the Exhibition and was then purchased by St Mary's Church when the old Tenor bell, cast in 1608 by Miles Graye

of Colchester, cracked beyond repair. The oldest bell within the tower is currently the 7th bell which was also cast by Miles Graye of Colchester in 1615. Bells can last a very long time, and the opportunity for the casting of a new one is something special indeed.

It will be a while longer before bell ringing can return to normal, but please do listen out as there will be occasions when the new bell will be test rung. We very much look forward to resuming our Tuesday Evening Practice and Service Ringing for Worship on Sunday mornings.

Our sincere and grateful thanks must go to our Churchwarden Simon Prideaux, The Essex Association of Change Ringers, Kelvedon Parish Council, Kelvedon WI and the many individual donors for their support and generosity.

On behalf of the St. Mary's Bell Ringers and PCC 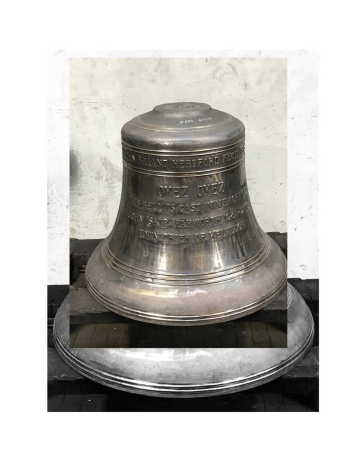 The initial funding target mentioned below has now been achieved and the PCC is currently seeking a Diocesan Faculty to allow the work to proceed.
The statutory Public Notice (and other supporting documents) relating to this can be seen by clicking on the files below.

Thank you to everyone who has already donated to this project so enabling us to get to this crucial stage.